How cute are these Easter Chicks! I found the pattern for the smallest chick in an old craft magazine I had and I knew I had to make a family lol. You can use any fabric you would like to make this chicks. I used a cream felt to make the chicks in the above photo. Later you will see the chicks I made from a yellow fleece and a Dollar Tree bar mop towel that I colored. If you would like to see how I color the bar mop towels you can check my blog labeled how to dye a Dollar Tree Towel. 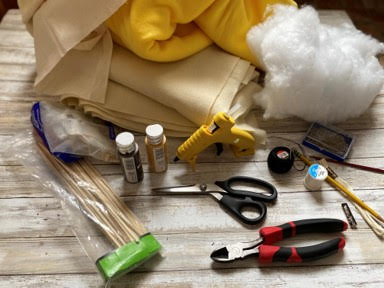 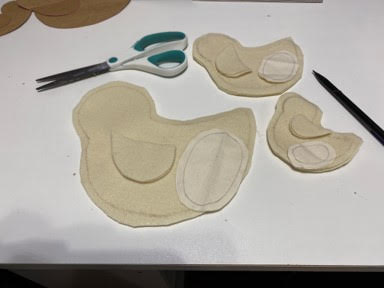 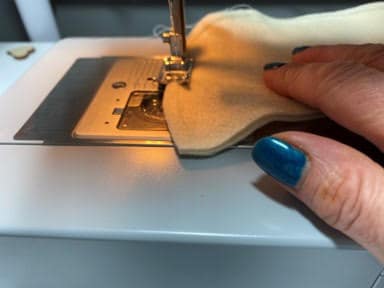 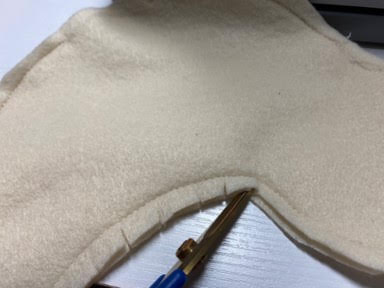 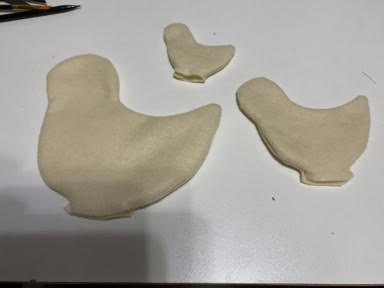 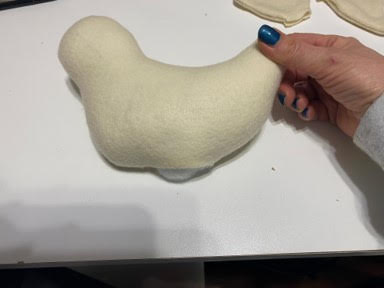 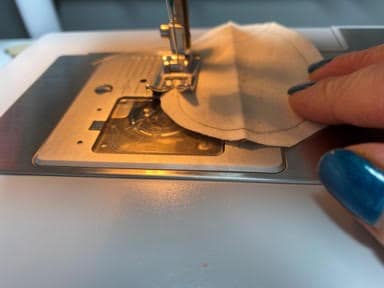 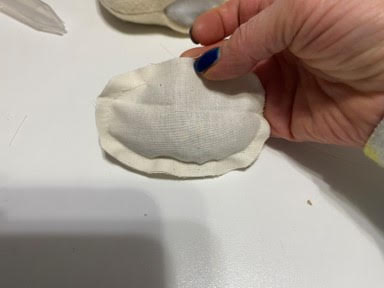 Take the bottom piece and insert into the bottom of the bird. Next stand up the chick to make sure it will stand on its own. Fold in the raw edges of fabric of chick body and using two strands of matching color embroidery thread stitch the opening closed. Your chick should stand upright. 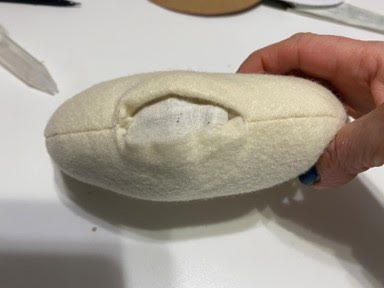 Making and Gluing the Chicks Body

Place chick pattern onto a double layer of fabric. Trace and cut out about a ¼” from trace line, make sure you mark where you need to leave your openings. Place chick bottom onto a double layer of muslin trace and cut out about a ¼’ from trace line. Trace and cut out two wings on the trace line. Take your chick body pieces and lay down the body piece that has the trace line facing up. Lay the second body piece on top then fold back the head section of the top layer. Apply a small line of hot glue above and below the beak opening on the trace line and glue down.  Continue to fold back the top layer applying hot glue to the trace line and gluing down. Make sure you leave the opening on the bottom of the body. Snip curves and corners and turn right side out. Stuff firmly with polyfill leaving enough room at the opening to insert the bottom piece. 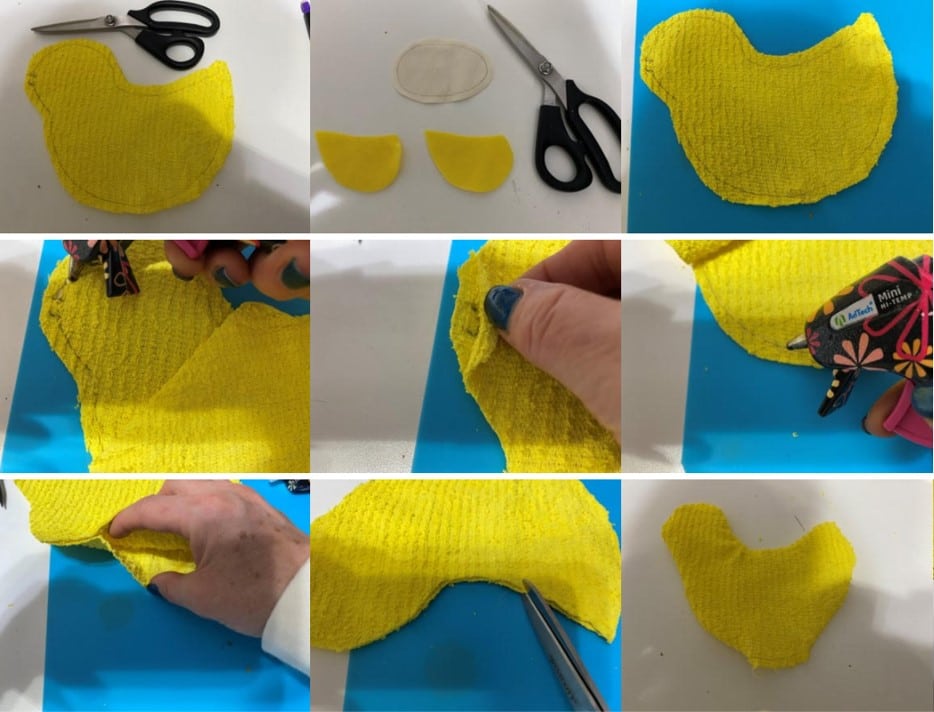 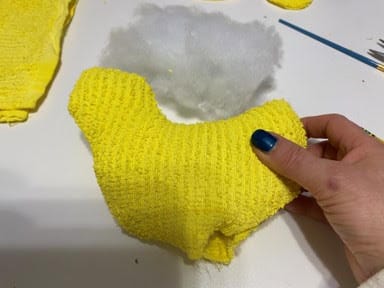 Take the two bottom pieces and lay down the piece with the trace line facing up.  Lay the second piece on top. Fold back the top layer the apply a small line of hot glue onto the trace line and glue down. Continue gluing around leaving an opening to fill with poly beads. Fill the bottom piece with poly beads or aquarium gravel then glue closed. Insert the bottom into the bottom opening of the chick. Turn in the raw edges and glue the opening closed. The chick should stand upright on its own. 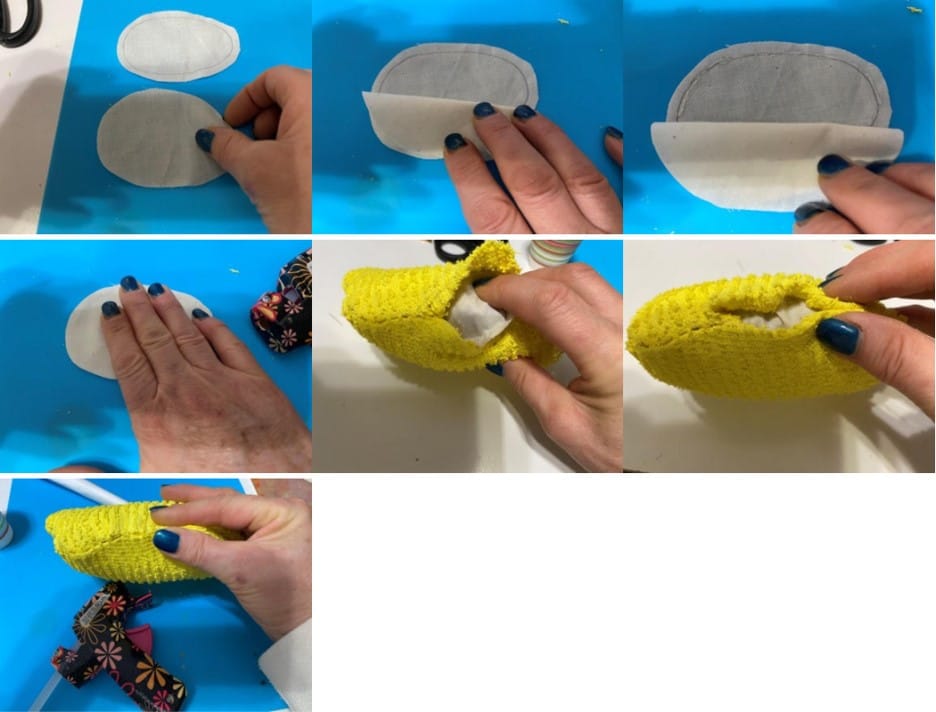 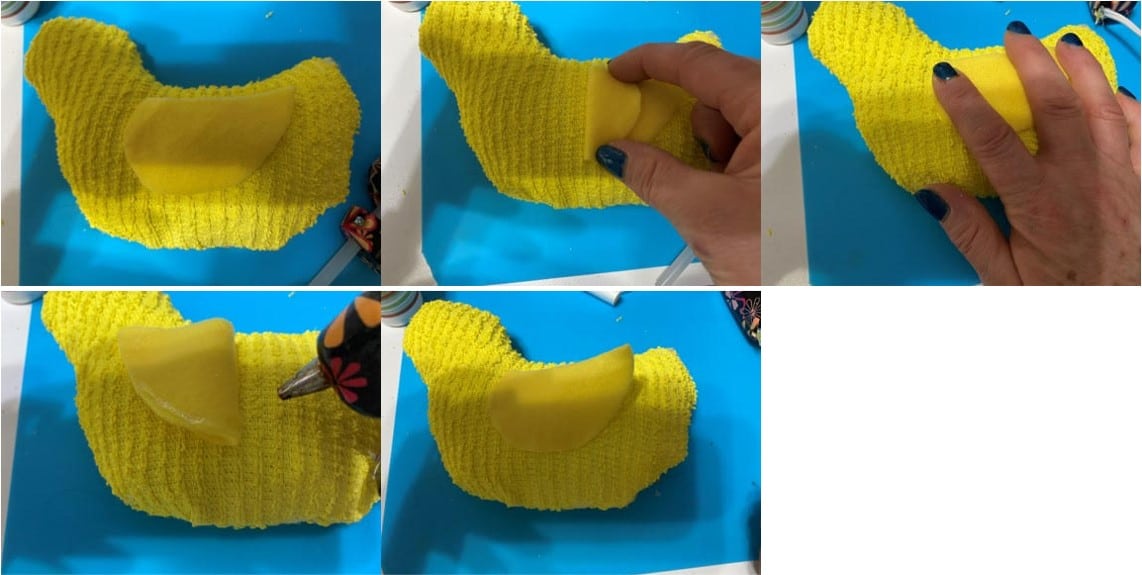 Adding the Eyes and the Beak

Using a pencil mark where the eyes are to go. Using six strands of black embroidery thread and needle stitch on the eyes. Make sure to draw the floss tight in order to form the slight indentations on the chick’s face. 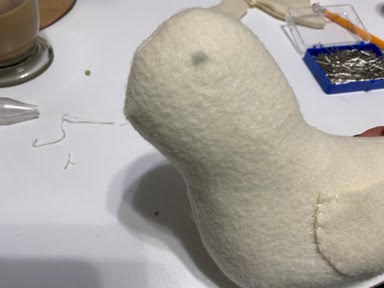 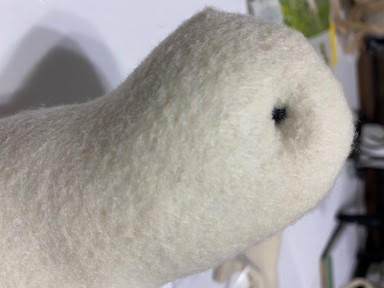 For the beak on the large and medium chick paint about a ½” of the tip of the wood skewer with the yellow/orange craft paint and allow to dry.  Drybrush lightly with brown paint. Using wire cutters cut the painted part of the skewer.  Using the handle end of the paintbrush open up the hole on the chick add a small drop of hot glue into the hole and insert the beak.  For the small chick repeat the same steps but instead of a skewer use a toothpick. 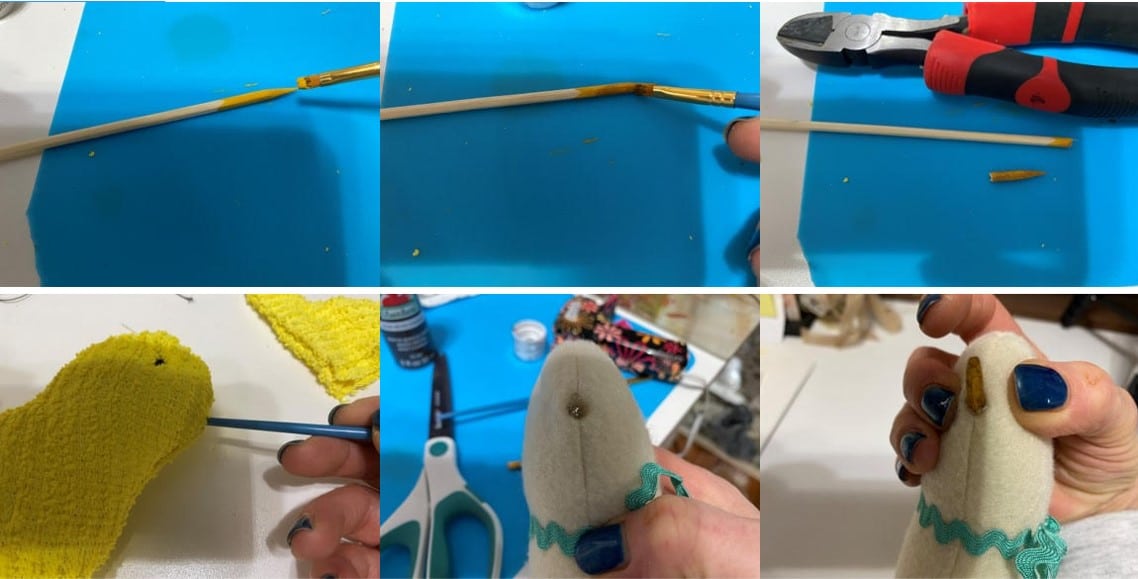 All that is left is to tie some ribbon around each of the chicks. I hope you enjoyed making these adorable Easter chicks. Below you can see the two sets of yellow chicks I made using a fleece for one and the dyed dollar tree bar mop towel for the other.  How cute would these be for a baby shower or make the big chick and tuck money in it’s wings for your child or grandchild for Easter. 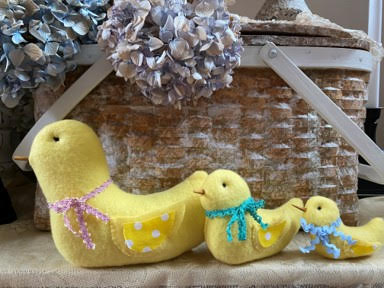 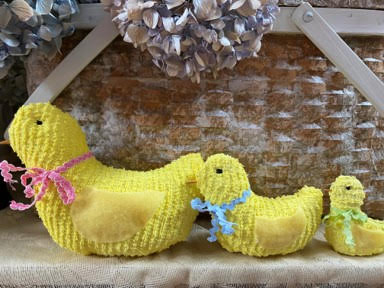