I just love Fall, the cooler weather, all the leaves are changing colors it is just a beautiful time of year, if you have been following The Crafty Decorator you know I try to create items to decorate my home with. I keep tree’s up all year round and change them for the seasons and I wanted some new fall décor so I decided to make some scarecrows to go with the other fall items we have been creating here at The Crafty Decorator and I just love how they came out I think the eyelids just make him, you can use him as an ornie for your dough bowl, add a jute hanger on him and use him as an ornament or by adding a small dowel to the bottom of him you can use him as a fall pick in your floral arrangements 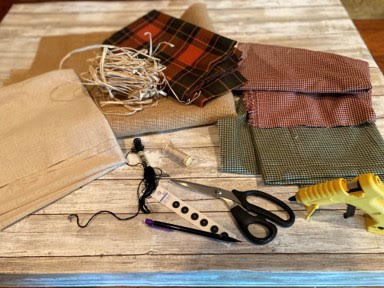 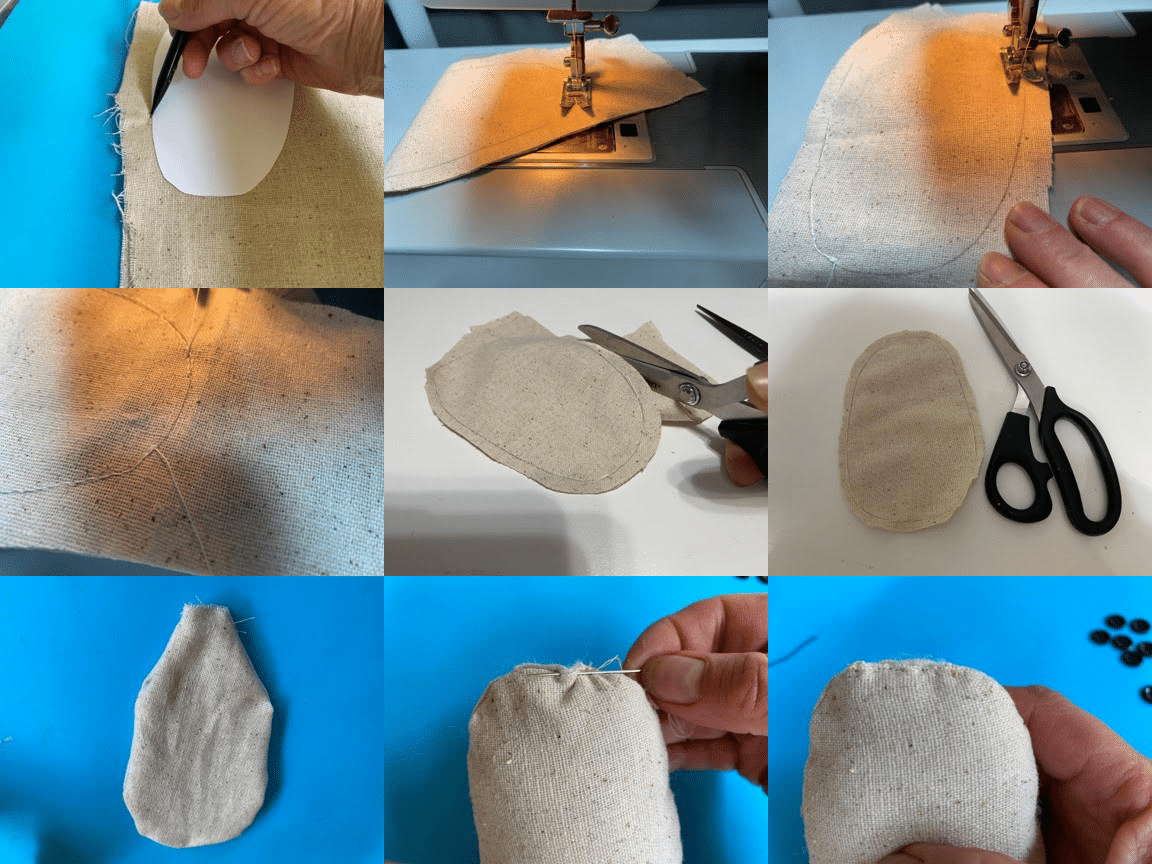 If you are going to glue the scarecrow head start by tracing the scarecrow head on a double layer of Osnaburg Fabric, you can also use muslin if you prefer, next about ¼” from your trace line cut off any excess fabric. Once you have the scarecrow head cut out separate your two pieces of fabric, your trace line is going to be your glue line, then using your hot glue gun start at the top left and right of the head add a small line of hot glue onto each side make sure you leave about 1 ¼” opening at the top of the head for turning and stuffing then place your second head piece of fabric and glue down, continue gluing the two pieces together until the head is all glued except for the opening at the top. Next turn Right Side Out and stuff with the polyester fiberfill. If you would like to make the scarecrow into a pick you will need to leave the opening at the bottom of the head instead of the top. Once you have the head stuffed and you are making the ornie add a small amount of hot glue to the opening and glue closed, if you are making the pick leave open you will glue closed later. 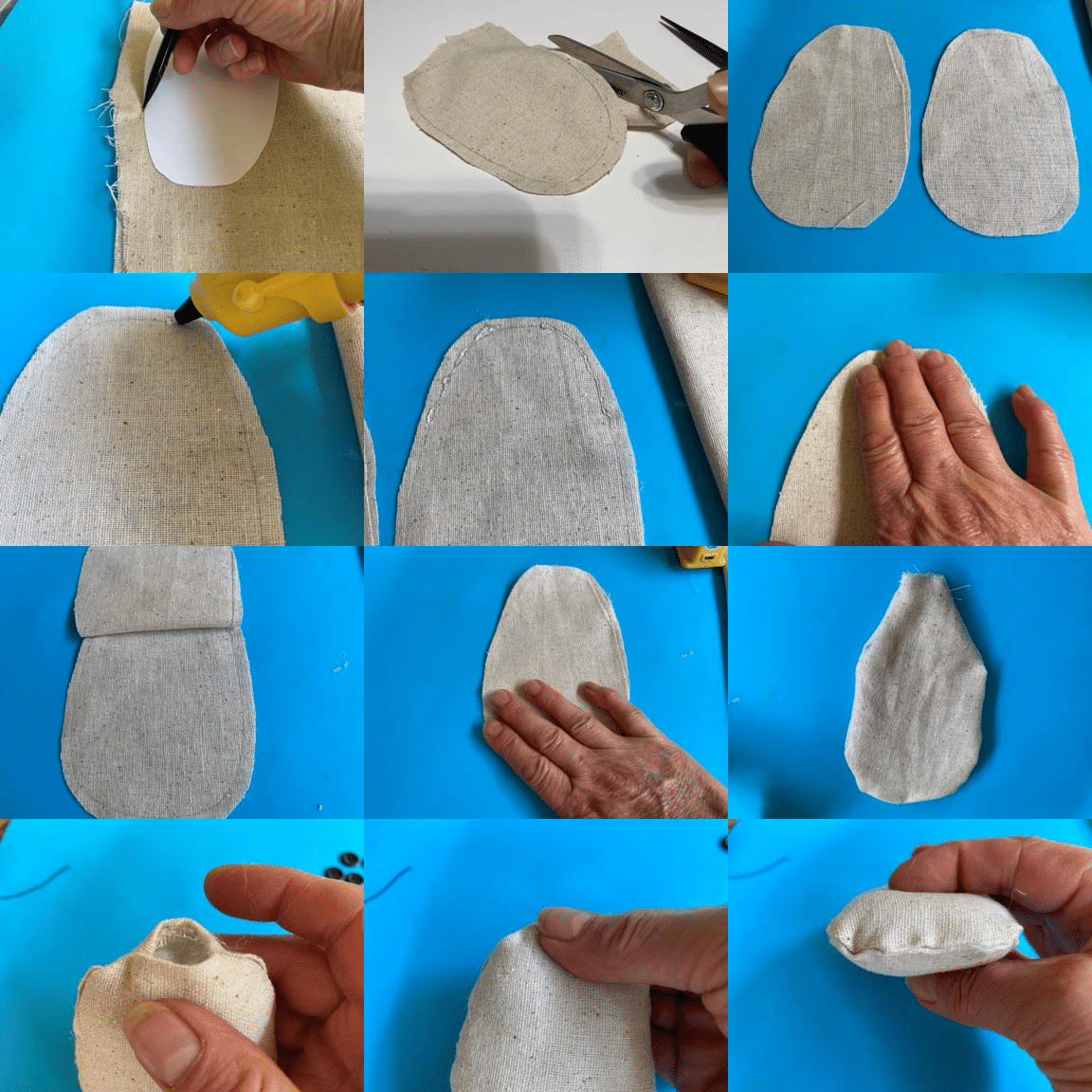 To add the face take two ½” black buttons and place about 4 inches up from the bottom of the head next cut out the nose from the homespun fabric and lay onto the face to make sure your eyes are in the correct spot.  Once your eyes and nose are set correctly separate the black embroidery thread into two sets of three strands, then start sewing one of the eyes on, when you are going through the button for the last time feed your needle through the fabric over and through the next button eye, see photo’s, when you are finishing the second eye feed the needle over to the nose, see photo’s, then attach the nose by stitching the homespun all the way around when you are finished bring the need to the back of the head and knot off. 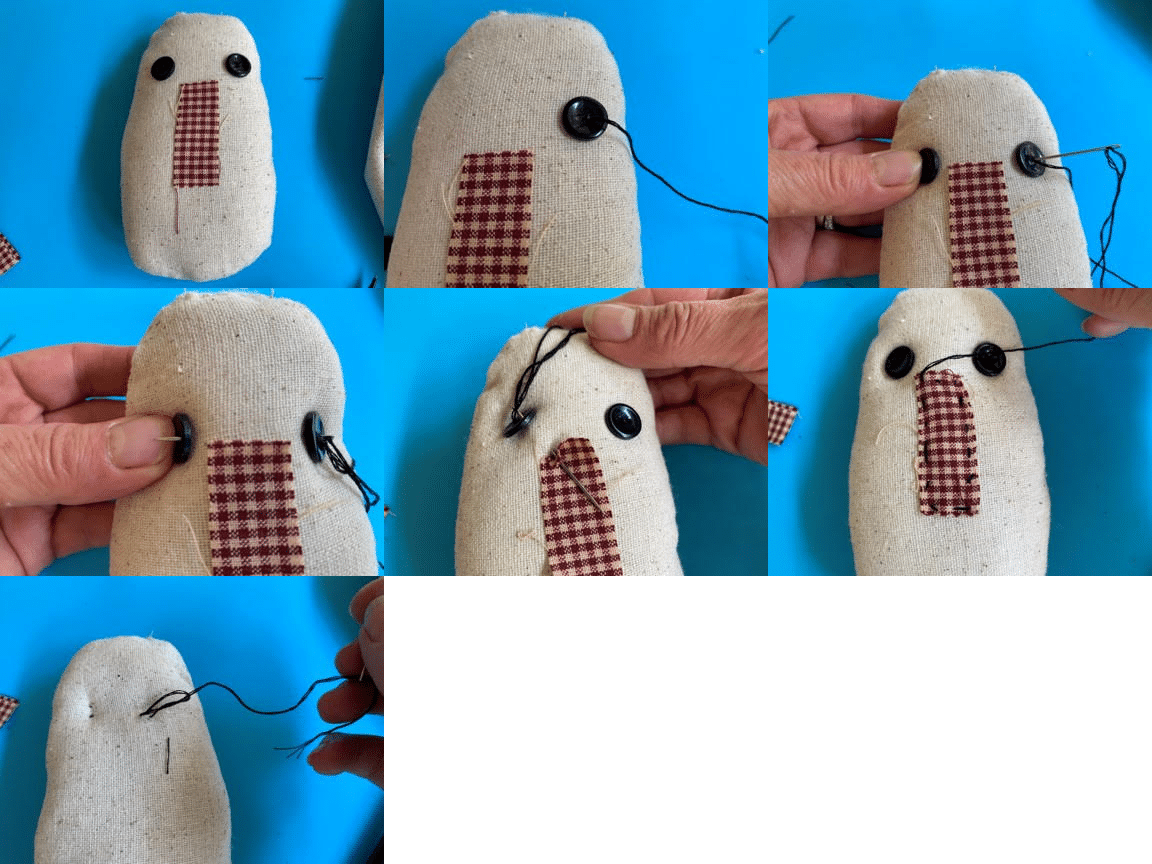 After you have sewn on the eyes and nose using a pencil draw on your mouth, refer to the pattern head, I start by drawing a straight line across then I add vertical lines I like to make some of them at a slant to make his mouth look a little crooked.  Once you have your mouth drawn using your black embroidery thread start on the left side bring you needle through the back of the head to the front left horizontal line, start by making your first stitch up to where your first vertical line is, bring your needle under and up to the top of the vertical line then stitch down the vertical line bringing the needle under and up to the horizontal line, see photo’s, continue stitching your mouth this way when you are finished bring your need to the back of the head and knot off. 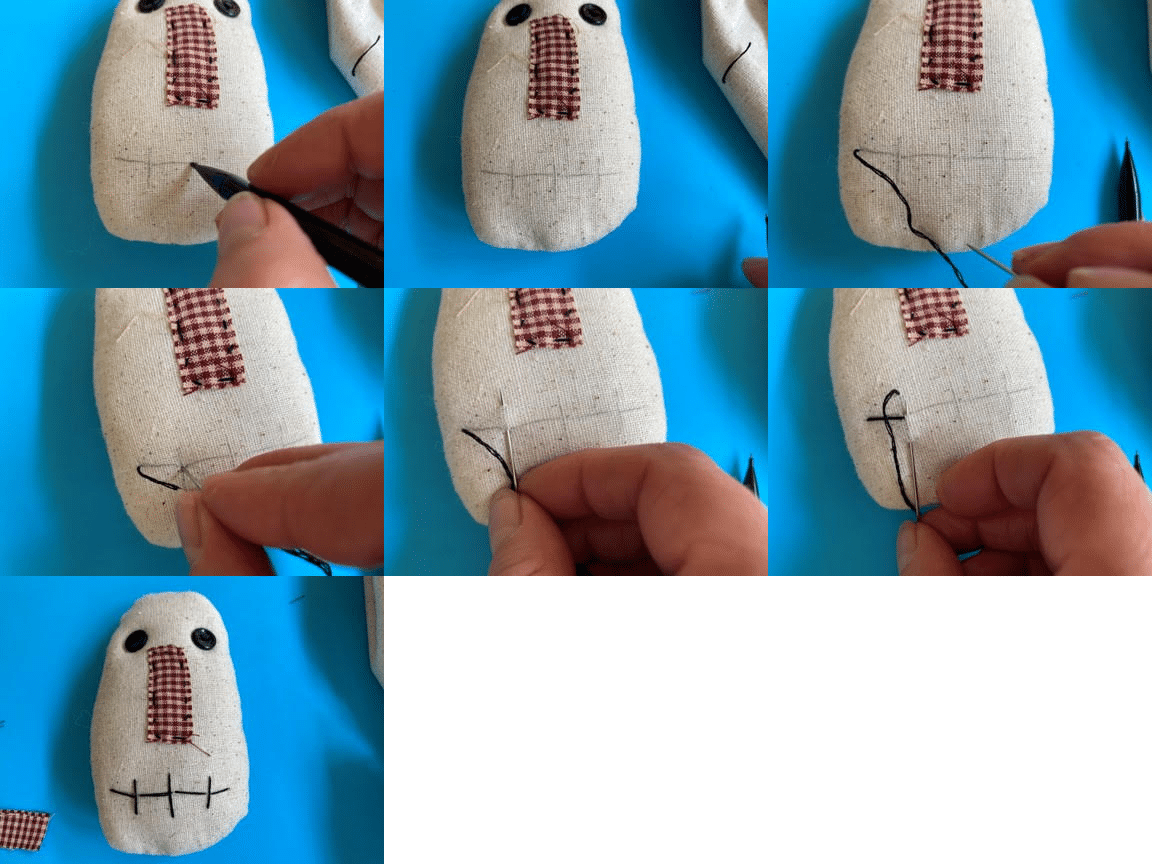 Now that you have the mouth on trace and cut out your eye lid on a double layer of osnaburg fabric, cut your eye lid out on the trace line.  Separate the two eyelids you will notice one side goes narrow this is the side that will go towards the outside of the head, place one eyelid at a slant over the eye covering part of the eye, placing it at a slant gives him a droopy eye, see photo’s, using your cream thread sew on the eyelid just in from the end, you are only sewing across the top of the eyelid.  Next place the second eyelid over the other eye this time place it straight across covering part of the eye sew on the eye lid. 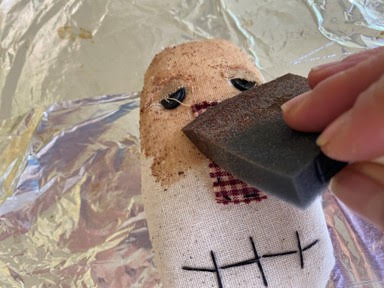 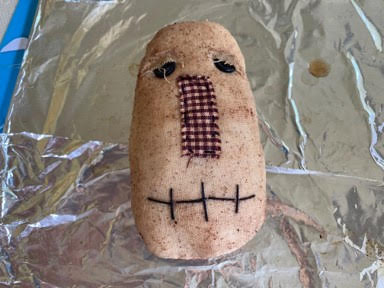 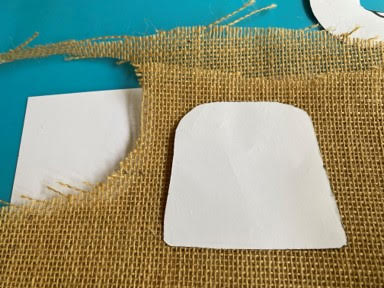 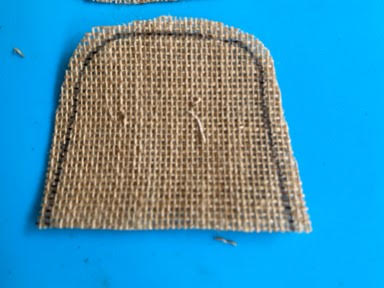 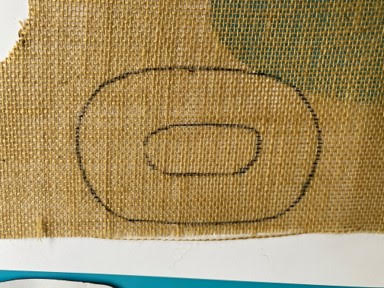 Now you are going to glue the hat together, start by separating the two hat pieces, the trace line is going to be your glue line, next add a line of hot glue on the trace line all around the hat then place your second hat piece on top and glue them together, turn the hat Right Side Out.  Slide the rim of the hat over the top hat piece, add a small line of hot glue to the end of the hat piece and glue the inner hat rim piece to the rim of the hat, see photo’s for reference, continue gluing around until the rim is connected to the hat. Next coffee stain and set out in the sun to dry. 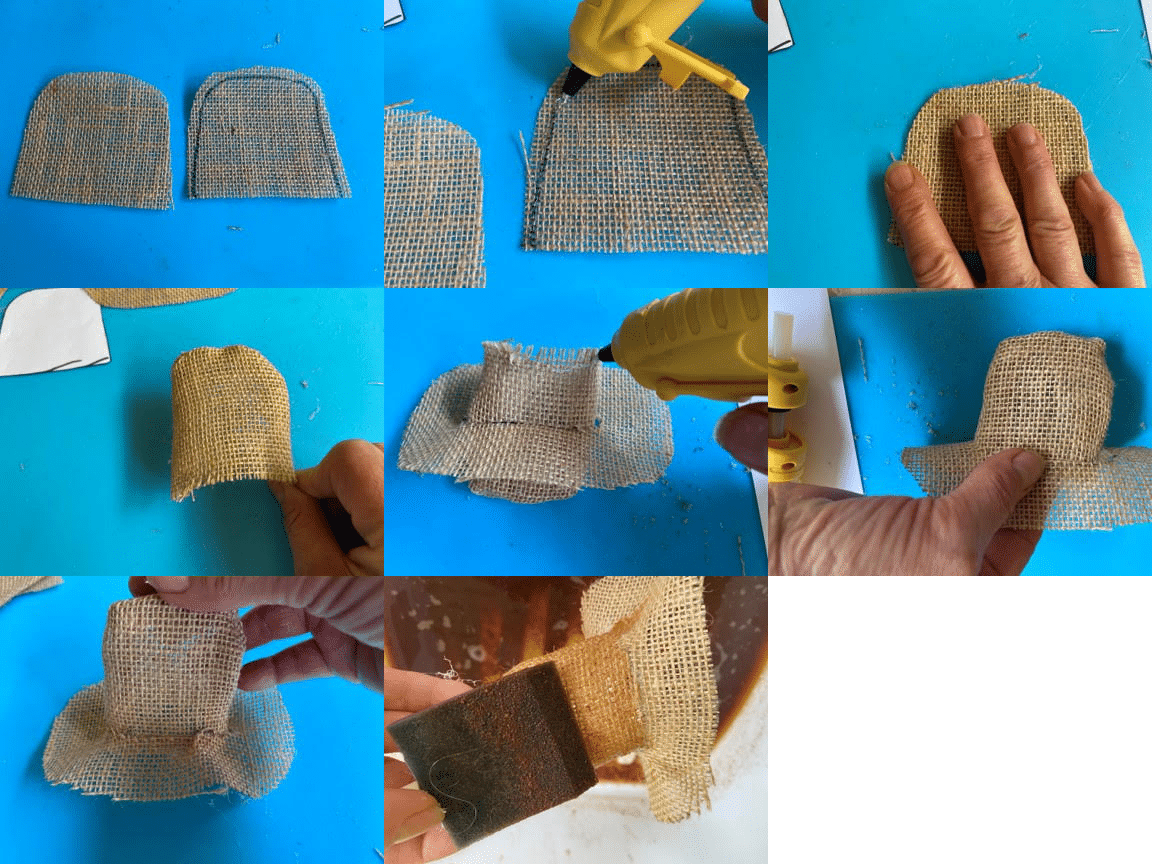 Adding The Hair and Hat 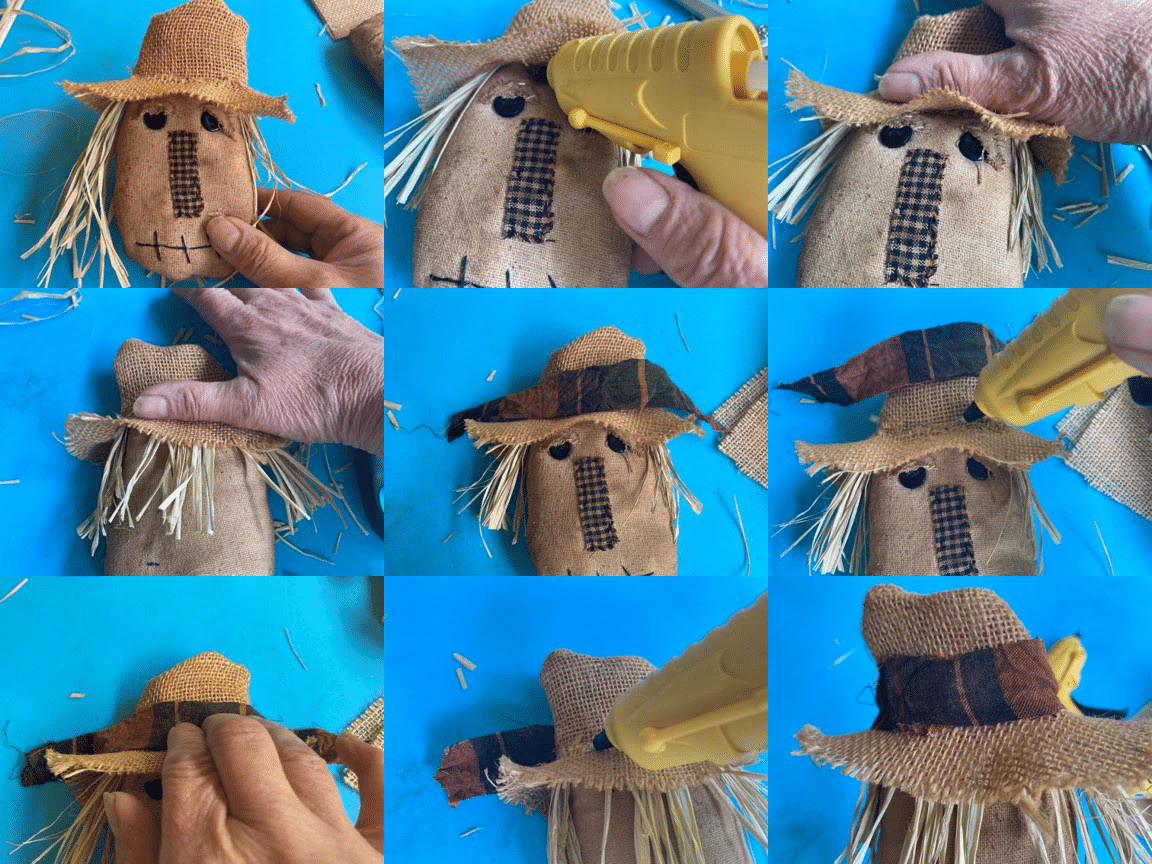 Making The Scarecrow As A Pick

I hoped you have enjoyed making these adorable scarecrows, I just love how they turned out.  You can use them in a bowl with some fall greenery and pumpkins or use them as a pick in your fall floral arrangement. 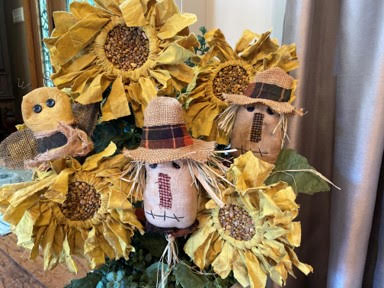 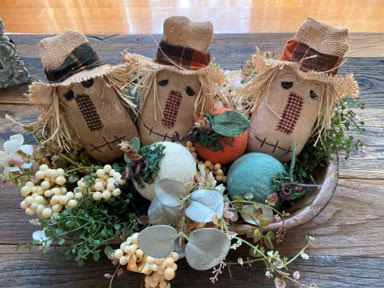