I can’t believe it is May already even though the weather feels like it is Fall.  My friends here at The Crafty Decorator wanted me to come up with some Americana crafts so I tried my hand at a Uncle Sam’s head and I have to say I think he came out adorable.  He would make a great bowl filler, ornament and would be adorable added to a flag garland for your mantle.  If you are not a sewer I am including directions on how you can also hot glue him.

Supplies You Will Need 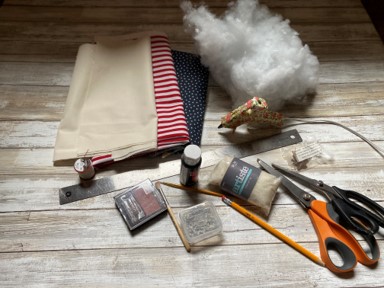 The first step you will need to do is print and cut out your pattern pieces.  Trace the head pattern onto a double layer of muslin.  Using the trace line as your sew line sew the head on your machine leaving open where indicated on the pattern.  Cut out about a ¼” away from your sew line then clip around the head being careful not to cut your stitches.  This will help stop the fabric from puckering when you turn right side out.  Turn right side out and stuff firmly with polyfill, I like to use the eraser end of the pencil to stuff the head firmly.  Using cream thread and a needle sew the opening closed.  You don’t have to be perfect the hair will cover the opening. 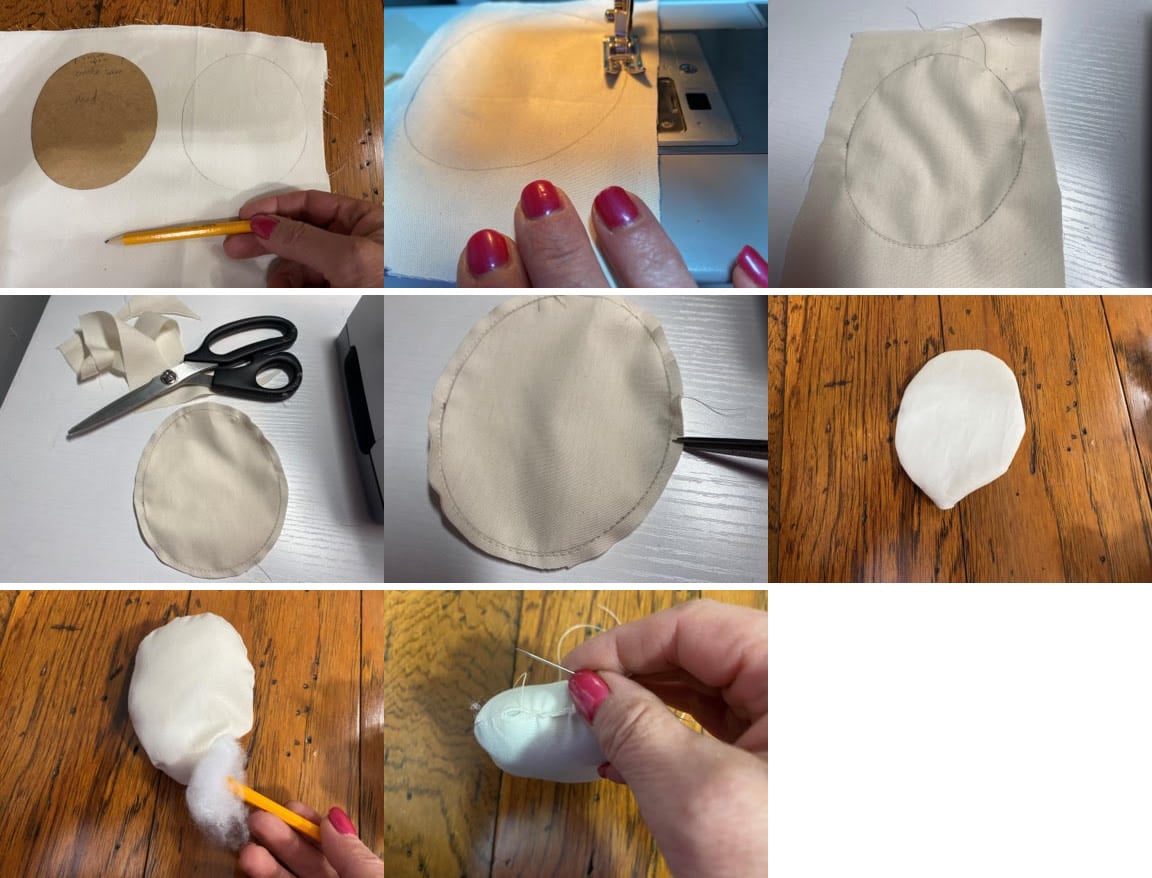 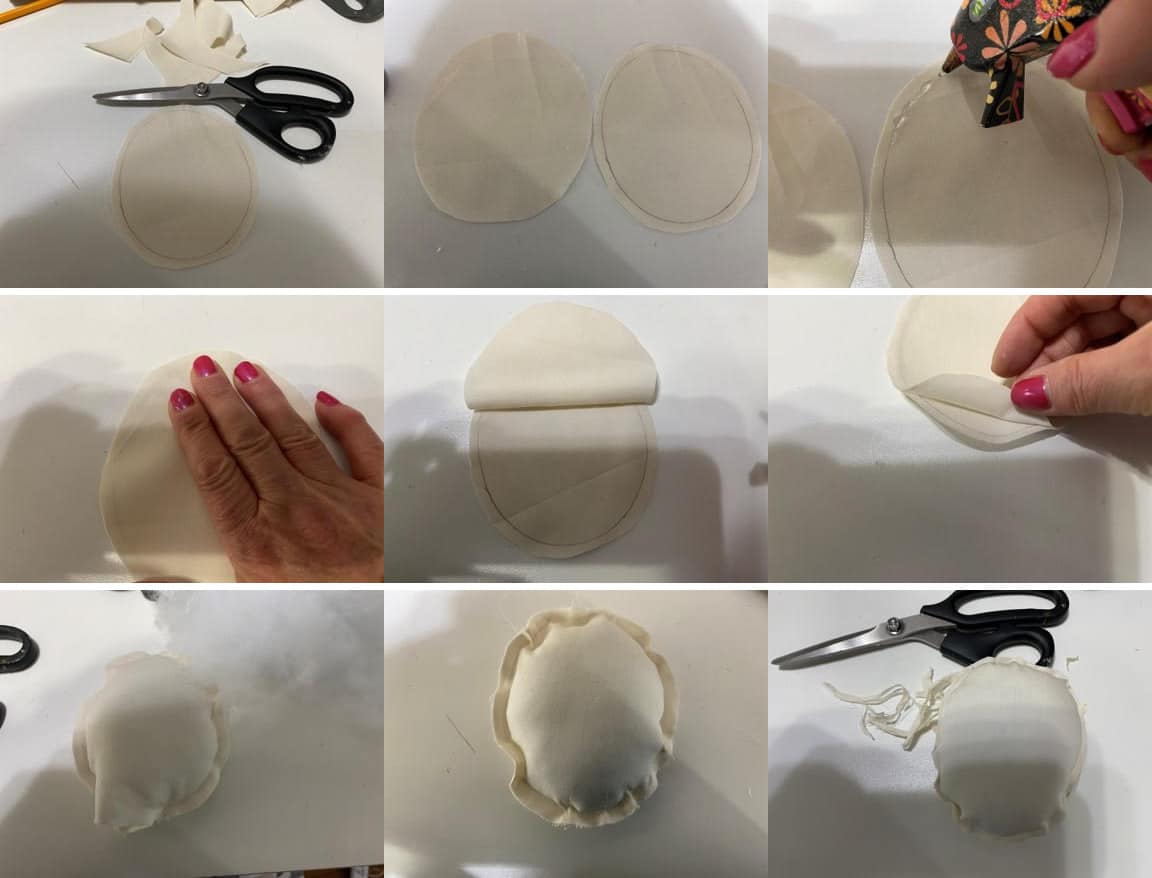 Using a pencil lightly draw the eyes and nose on the head where indicated on the pattern.  To sculpt the nose using a heavy cream thread and needle insert the needle in the back of the head coming out at the top of the nose.  Make a small stitch down, and come out on the other side of the nose at the top.  Go back and forth in the same manner pulling the thread a little tight as you go.  At the bottom go across the nose coming out the back of the head and knotting off. 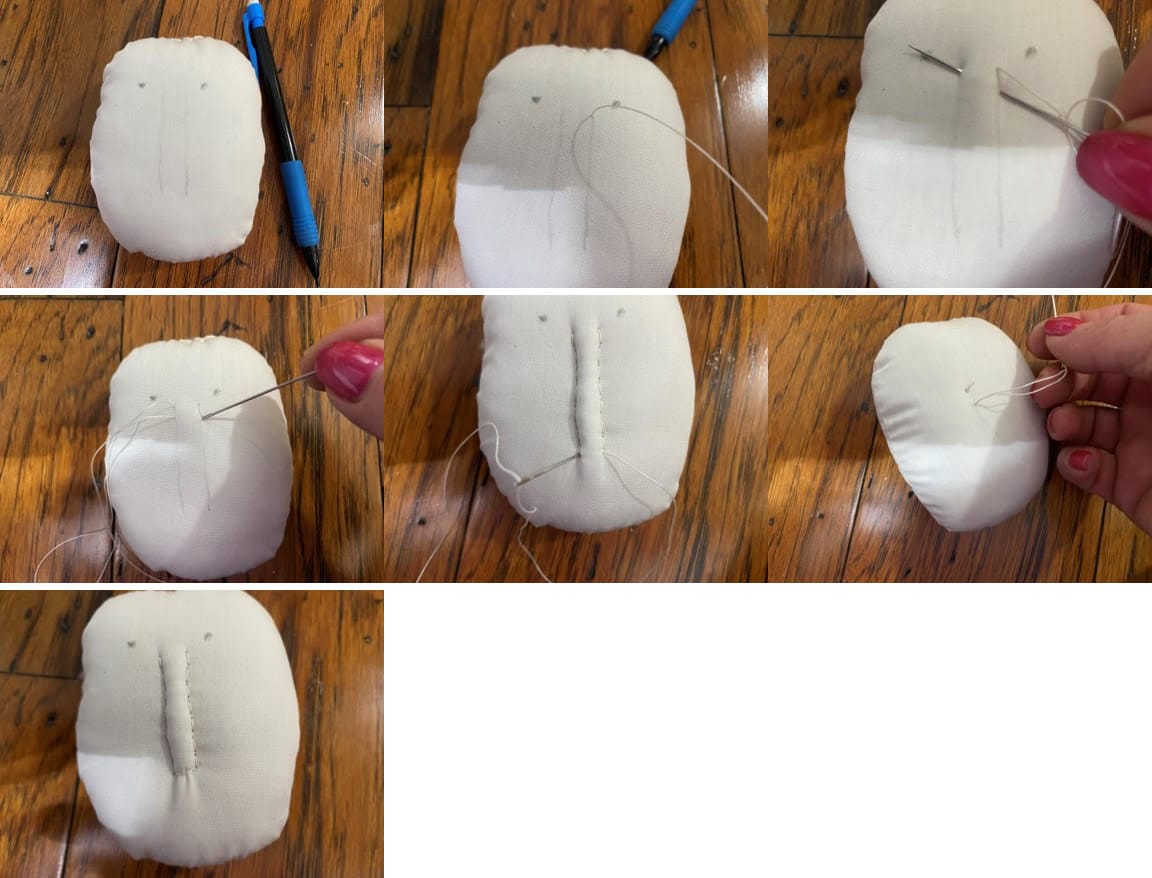 Using black craft paint and a paintbrush paint on the eyes.  Set aside to dry while you make the hat.

With the right sides of your fabric facing together trace the top part of the hat on the white and red stripe fabric.  Sew the three sides together using the trace line as the sew line,  leaving open at the bottom where indicated on the pattern.  Cup out about a ¼” from the sew line.  Clip the corners diagonally close to the stitching.  Turn right side out and stuff firmly. 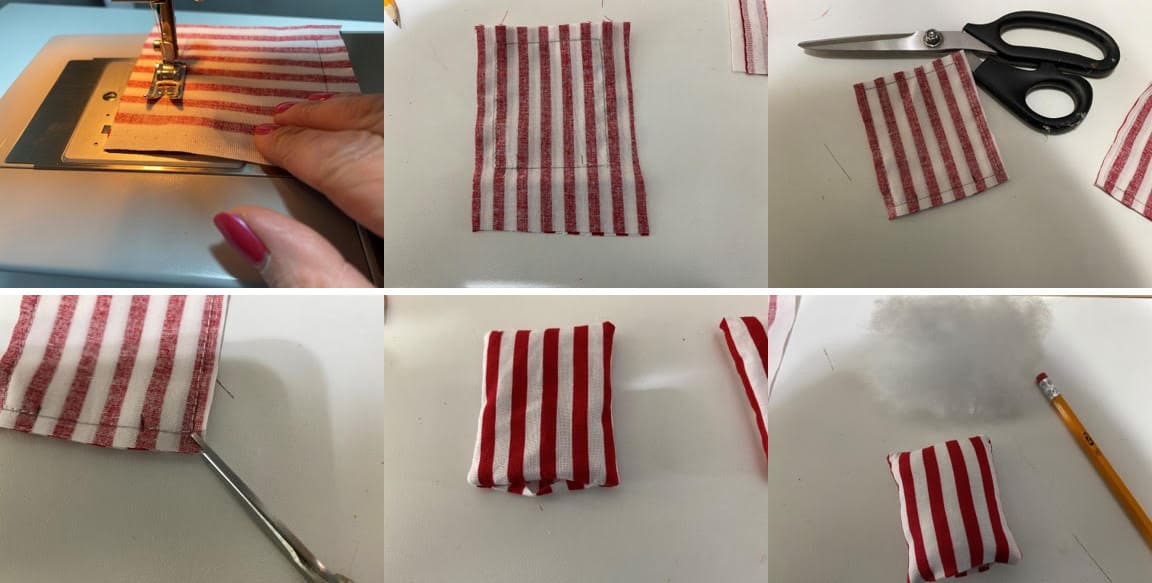 With the right sides of your blue star fabric facing together trace the hat brim.  Sew all the way around the brim using the trace line as your sew line.  Cut out about a ¼” from the sew line.  Clip around the hat brim.  Now you will need to cut about a 2” to 2 ¼” slash trough both pieces of fabric, use the pattern as a guide.  You want the cut to me slightly smaller then the thickness of the top of the hat so it will fit snug.  Turn right side out. 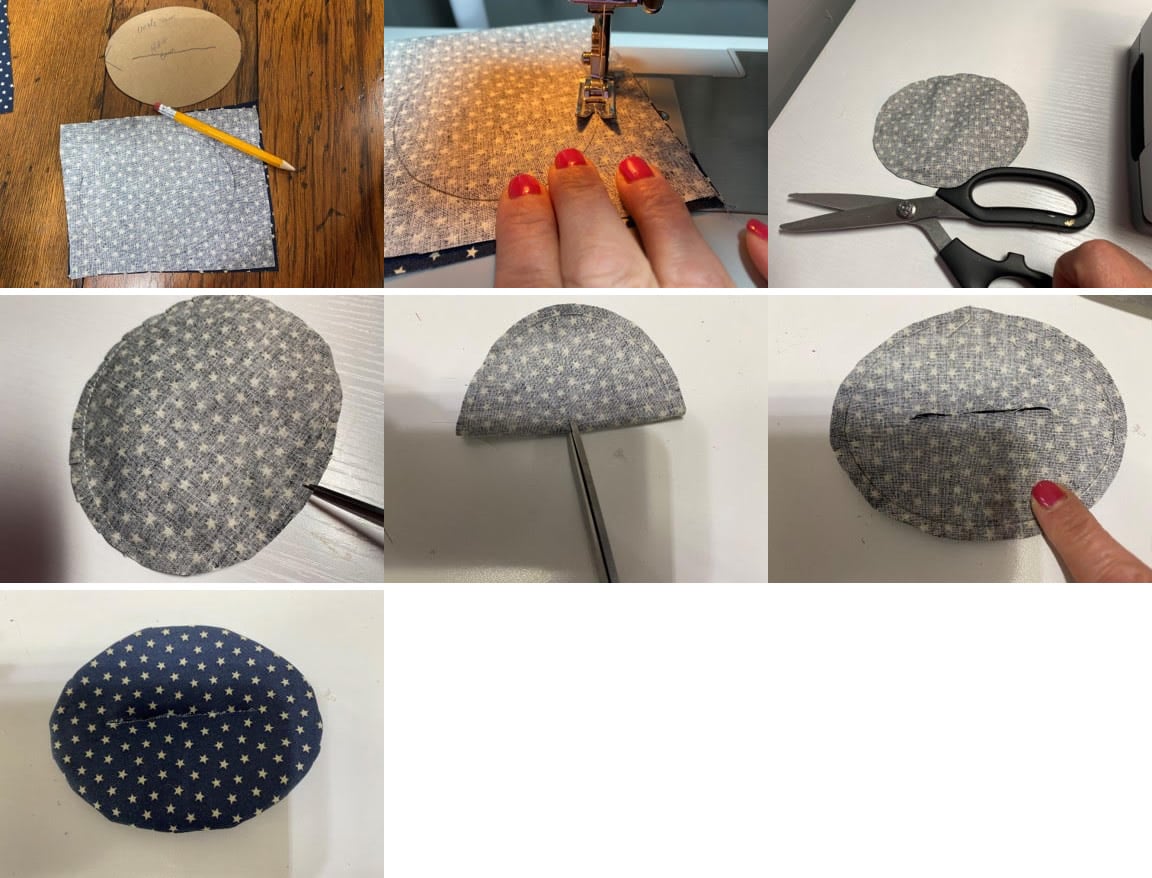 To glue the hat with the right sides of the red and white stripe fabric together trace the top of the hat on a double layer of the fabric.  Cut out about a ¼” from the trace line.  Separate the two pieces.  With the trace line facing up add a line of hot glue around the top of the hat on the trace line.  Place the second piece of fabric on top with the right side facing up and glue down.  Fold back the bottom of the hat and continue to glue around leaving the opening where indicated on the pattern.  Using pinking shears trim around the top hat piece making sure you don’t trim to close to the glue line.  Stuff with polyfill. 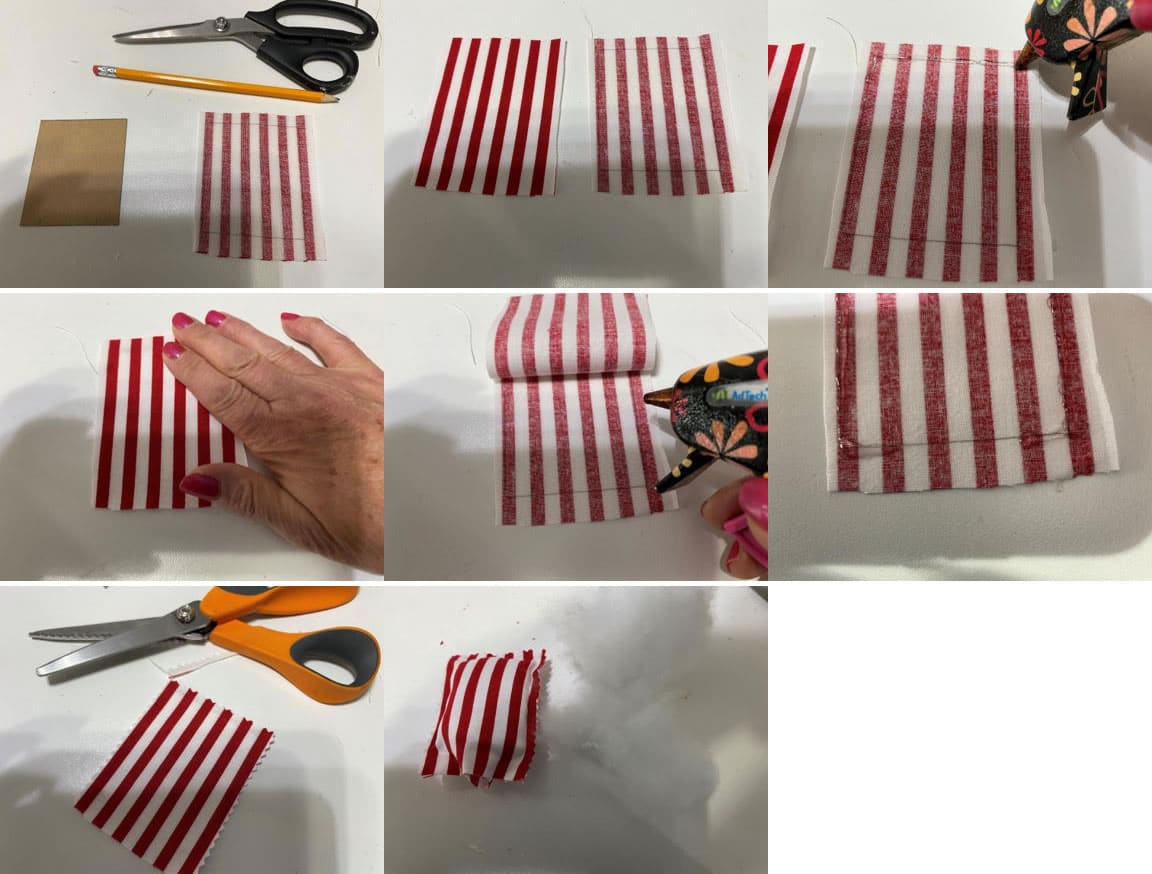 With the right sides of the star fabric facing each other trace the hat brim on a double layer of star print fabric. Cut out about ¼” from the trace line. Separate the two pieces of fabric. With the trace line facing up add a line of hot glue around part of the hat then place the second piece with the right side facing up on top and glue down. Continue gluing the two pieces together all the way around. Using pinking shears trim around the hat trim close to the glue line. Make a 2” to 2 ½” cut through both layers of fabric as indicated on the pattern. Lightly stuff the hat brim I decided this after I have added the brim to the head so I do not have a photo for this step. 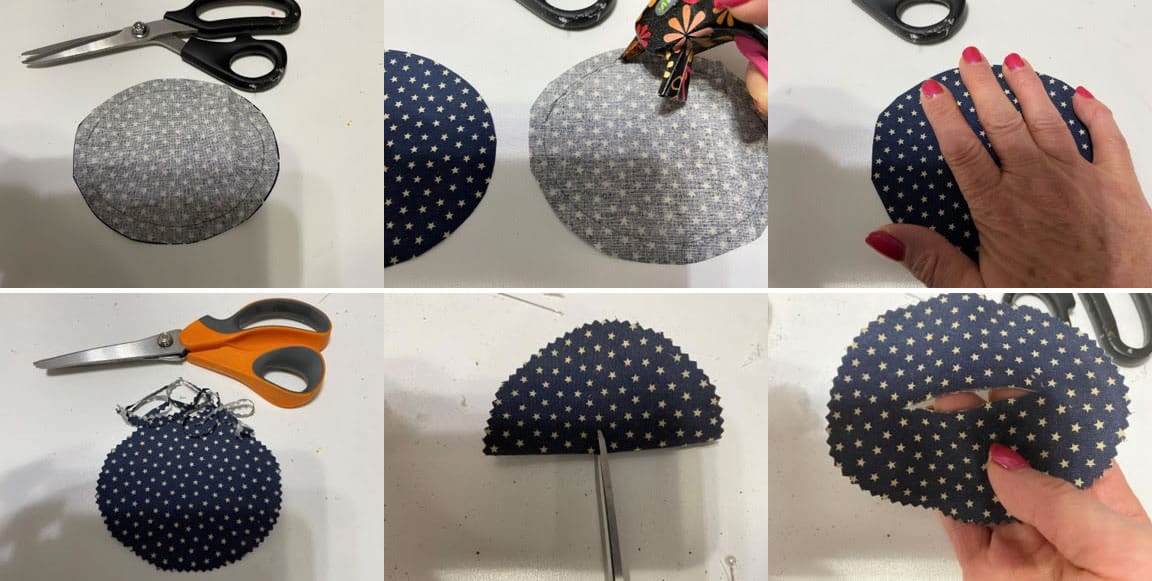 Now that you have all your pieces made it is time to coffee stain. If you would like my coffee staining mixture you can find it on my blog called how I coffee stain and color fabric. Place your head on a piece of foil or parchment paper then brush the entire head with the coffee mixture. I do not like the head to dark so I wrap the head in a paper towel and remove the excess coffee until I get the color I want. Next brush the top of the hat with the coffee stain mixture I do not use the paper towel on the hat pieces. Place the whole brim of the hat into the coffee mixture then squeeze out. You can let them dry naturally or your can place them on a foil lined cookie sheet and dry them in a 200 degree oven. Make sure you check them every 5 minutes or so until dry. If you have glued you pieces you will have to let them dry naturally. You can also coffee stain some cheesecloth at this time to wrap around the hat.

Adding The Hair, Brow’s and Beard 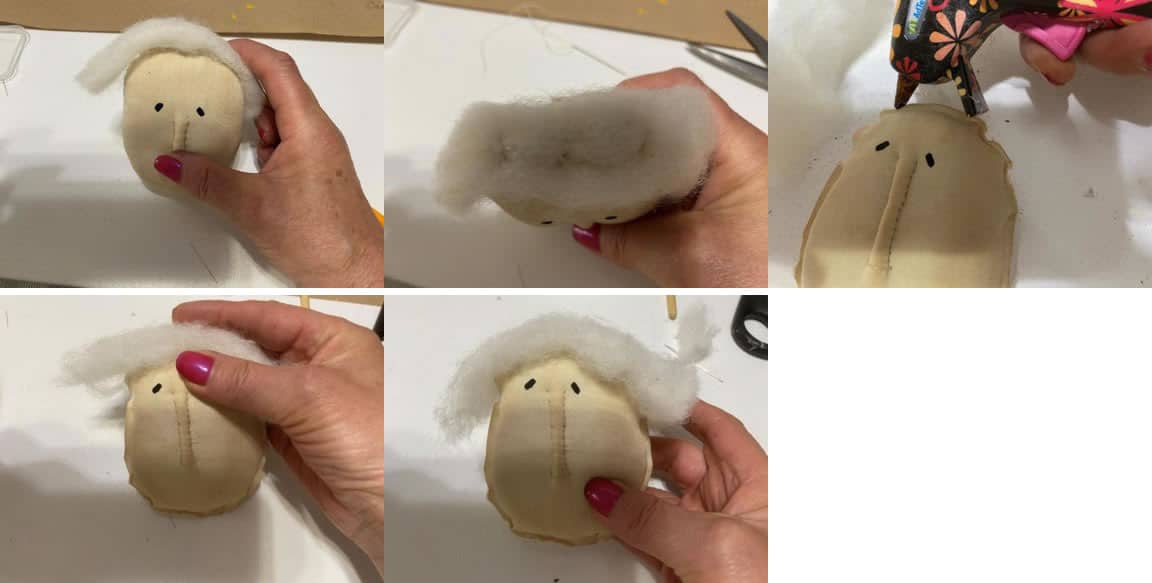 For the eyebrow’s cut a small piece of wool roll in-between you fingers then place above the eye to see where you would like it to be.  Add a drop of hot glue above the eye and glue down.  You may need to trim the length of the brow after attaching.  Repeat this step to the other eyebrow. 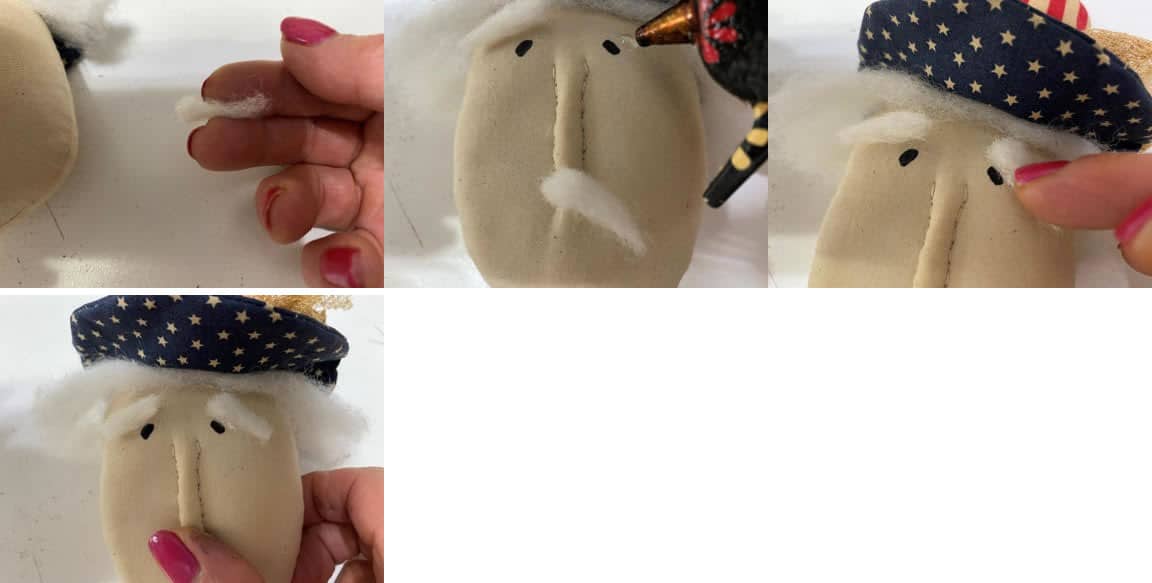 If you would like to also add a mustache cut a small piece of wool place under the nose between the nose and beard to check size and placement.  Lift the mustache add a drop of hot glue and glue into place. 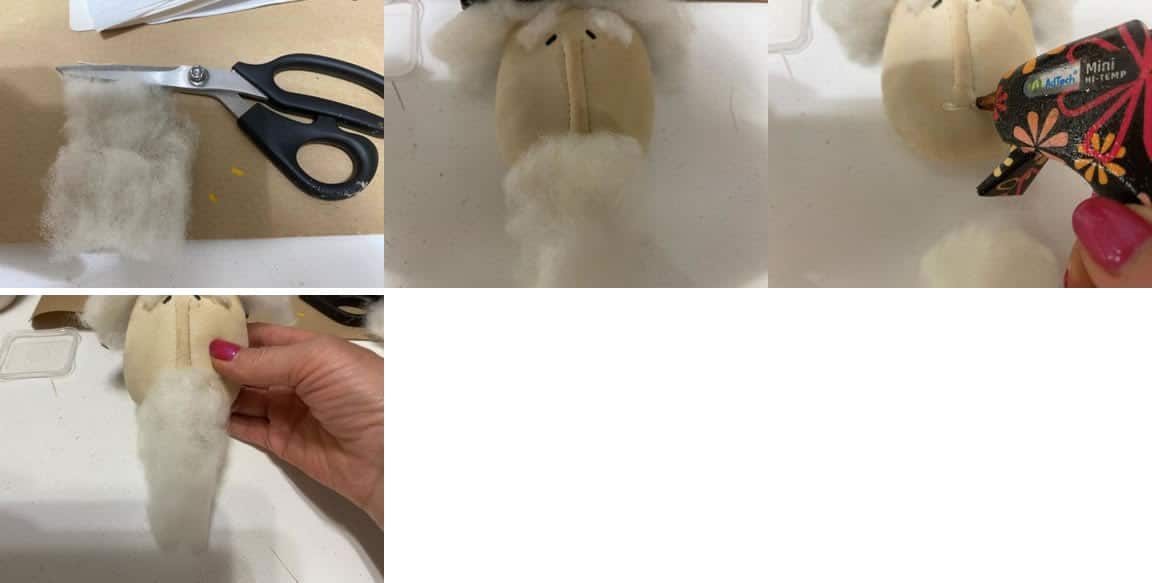 To sew the top hat piece onto the head place the hat on top of the head in the center then using sewing pins pin in place at the front and back. Using cream thread and a needle sew the hat to the head all the way around and knot off. Next slid the brim of the hat over the top piece and sew the brim to the top piece of the hat. If you feel the brim is tight enough around the top of the hat you can skip sewing the brim to the hat. I chose to sew it just in case. 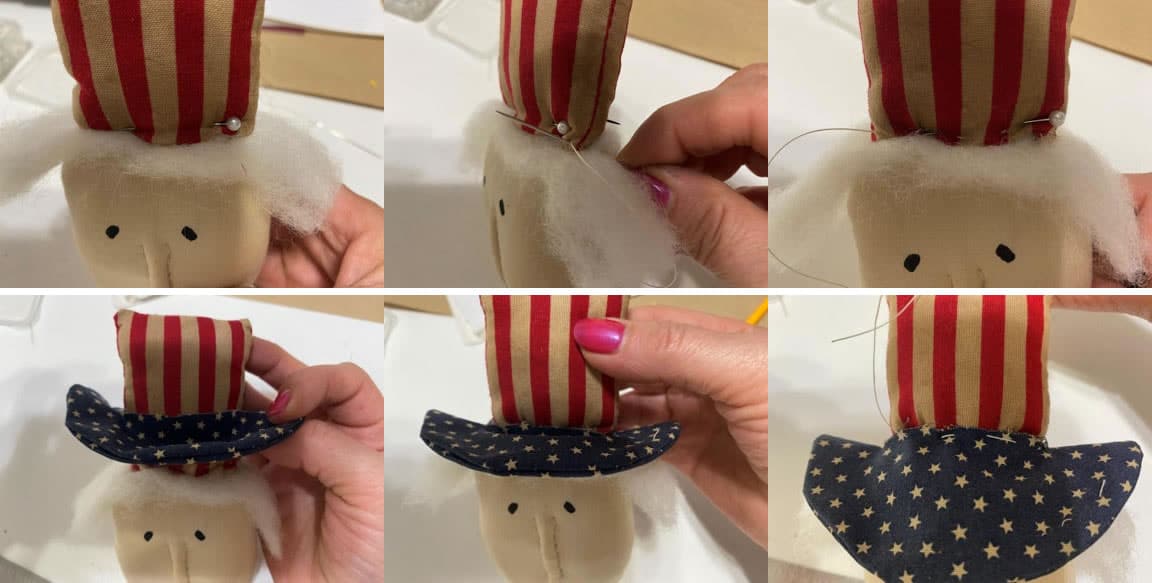 The last thing to do is tie a piece of cheesecloth around the hat to hide where the brim attaches to the top of the hat. After I was done I decided to hot glue a small rusty star on top of the cheesecloth. 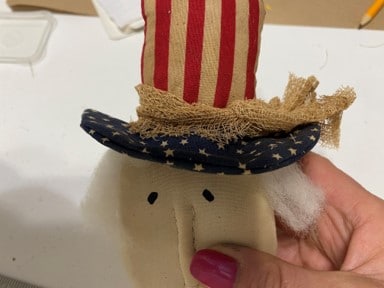 I hope you enjoy making these adorable Uncle Sam’s heads and make them your own.